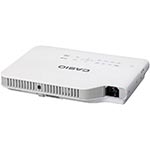 Casio mpn:XJ-A142
We also sell accessories for your projector. 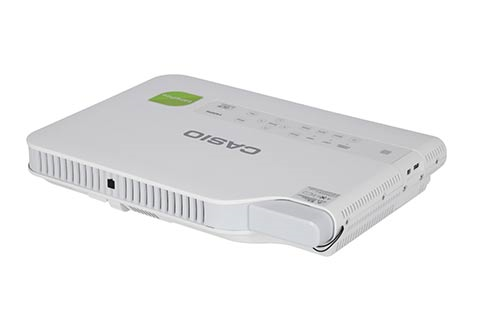 Casio's Slim Series XJ-A142 incorporates a Casio-developed and patent-pending Hybrid Light Source which combines Laser and LED technology for amazing high brightness that can last up to 20,000 hours. The Casio XJ-A142 is an earth-friendly, low maintenance,  five pound projector with features such as a 2X Power Zoom Lens making it a great portable projector. The Slim Projector eliminates the need for a short life mercury lamp (typically 3,000 hours) and is economical to operate.

By combining a laser, a fluorescent element and an LED, Casio has created an original mercury-free hybrid light source* capable of generating high brightness. Casio has achieved high brightness output of green light, which until now, has been considered difficult with conventional semiconductor light sources, by efficiently converting blue laser light into green light using a fluorescent element.

Provides 10X longer light source life than Casio mercury lamp while being more economical based on lamp replacement. The XJ-A142 projector features quick startup and shutdown. The projector reaches its maximum brightness in a minimum of eight seconds and requires no cooling down period - an advantage for keeping presentations focused and smooth.

Compared with conventional high-brightness projectors employing mercury lamps, Slim technology cuts costs as well as the time and effort involved in lamp exchange while maintain clear, high-quality images over an extended period. The lamp free design is backed by a comprehensive three year warranty including the light source; users can expect reliable worry free operation from the Slim projectors.

Whether you are in a small office or a large boardroom the 2X power zoom lens gives you the flexibility to easily position the projector.

The Automatic Brightness Adjustment, which adjusts lumen output based on the level of ambient light in the room, saves power, which saves money (and saves you from eye strain as well.)

*The Slim Series XJ-A141 can only be replaced by the Casio Factory Service Center. Disassembly of the projector and/or use of its technology or components for other purposes is potentially dangerous and strictly prohibited.