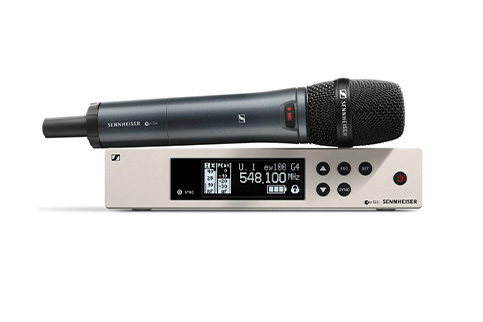 Cardioid, dynamic wireless system for singers or presenters. The first choice for both sound designers and occasional users because of its simplicity.

Now even more simple, flexible and reliable: The 100 series has become the first choice for both sound designers and occasional users because of its simple operating concept – and because the system makes no compromises in terms of live sound.

Eventually, you’ll get to a level in your career as an engineer or musician when the size stage you’re performing on demands more than an entry-level wireless system. You simply need more reach, more power and more reliability than what a 2.4 GHz system will allow. Enter the evolution wireless G4 100 Series—the next level in your journey as a stage professional.

Feature-rich and built to last

The evolution wireless G4 100 Series is packed with features that make it possible to get you up and running fast and efficiently. Use the Easy Setup function to automatically scan and select the best frequencies around you and take full advantage of the UHF spectrum. With up to 100 meters of range and a battery life of 8 hours, it’s easy to see how the durably constructed ewG4 transmitters and receivers will perform when you need them to.

We have no downloads available for the Sennheiser EW 100 G4-835-S-A dynamic wireless system at this time.