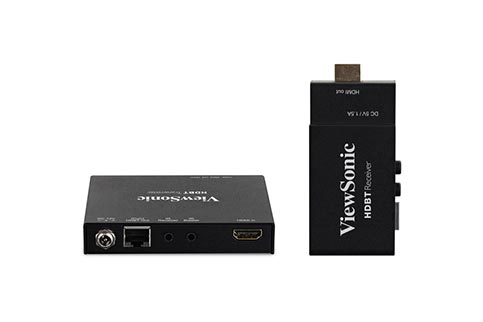 Take your digital video installations to new lengths with the high-performance, small form factor ViewSonic® HB10B HDBT Transmitter and Receiver kit. Featuring the world’s first integrated HDMI connector, as well as a miniature form factor, the HDBT receiver seamlessly integrates into almost any display device with an HDMI input. Utilizing HDBT technology, the HB10B kit is capable of sending uncompressed ultra-HD audio & video, IR controls, and power from up to 70 meters away via network cable. With an integrated IR blaster and receiver ports, the HB10B kit lets you take control of your media equipment on both ends with bi-directional control. The HDBT receiver comes equipped with PoC (Power over Cable), making it one of the most versatile receivers in the market. In addition to seamlessly integrating with almost any HDMI-based display devices such as televisions, large format displays, digital signage, etc., the HDBT receiver (Dongle type) also fits into any PortAll® compartment available on select ViewSonic® projectors – enabling you to discreetly stream uncompressed multimedia content from set-top boxes, Blu-ray players, AV receivers and more.

Featuring a miniature form factor, the HB10B receiver can be carried by installers easily, when deploying the Pro AV system in a large venue.

Utilizing HDBT technology, this kit is capable of sending uncompressed HD video and audio via network cable – so it’s perfect for sending content over long distances to your display devices.

With compliance to the HDMI specification, all audio and video transmitted, including 3D content, meets high-def standards for capacity, performance, resolution, and colour.

With HDCP compliance, data is encrypted when transmitted between the source and the display, thus preventing the possibility of illegal interception or copying of the data.

Featuring an integrated HDMI connector, as well as a miniature form factor, the HDBT receiver seamlessly integrates into almost any display device with an HDMI input. This includes televisions, large format displays, digital signage, and projectors.

Through IR extended cables, the integrated IR blaster and receiver ports allow you to take control of your media equipment on both ends with bi-directional control.

ViewSonic®’s exclusive PortAll® feature is a hidden compartment with an integrated and secure MHL/HDMI port that lets you discretely stream multimedia content from the HB10B.

We have no downloads available for the Viewsonic HDBT Transmitter and Receiver Kit at this time.